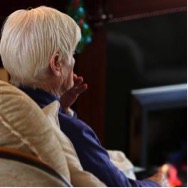 At today’s General Audience the Pope continued his series of catecheses on the family, focusing on grandparents: the elderly are not deadweights and they are not aliens, a society without gratuity is a perverse society.

Above: An eldely woman sits alone

“I remember when I used to visit old age homes, I spoke to each of the people there and the conversation usually went like this: ‘How are you? And your children?’ – ‘Fine, fine’ – ‘How many do you have? – ‘Lots.’ – ‘And do they come to visit you? – ‘Yes, yes, always, yes, they come.’ – ‘And when was the last time they came to visit?’

To which the elderly woman – I remember one in particular ­ would say: ‘Well, at Christmas.’ And we were in August! Eight months had passed without her children visiting once; abandoned for eight months! This is a mortal sin, you understand?” Pope Francis dedicated today’s General Audience in St. peter’s Square to the elderly – “grandparents, great aunts and uncles” – continuing his series of catecheses on the family.

“The number of elderly has gone up but our societies have not done much to make no room for them, showing a lack of respect and real consideration for their fragility and dignity,” Francis said. “As long as we are young we ignore old age as if it were a disease that should be kept at bay; then when we grow old, especially if we are poor, sick or alone, we experience the holes in a society that is built on efficiency and consequently ignores the elderly. But the elderly are an asset, they must not be ignored.”

Francis recalled Benedict XVI’s visit to an old age home run by the Community of Sant’Egidio (“The quality of a society, I mean of a civilization, is also judged by how it treats elderly people and by the place it gives them in community life”), reiterating: “It is true, attention for the elderly is what makes the difference within a civilization. Does a civilization show attention toward the elderly? Is there room for the elderly?” “A culture based on profit insists on making the elderly seem like a burden, like deadweights. Not only do they not produce, they are an encumbrance even: result? They are discarded. It is a horrible thing to see the elderly being discarded, it is a sin! People do not dare to say it out loud but this is what happens! There is cowardice in this addiction to a throwaway culture. But we are used to throwing people away. We want to get rid of our growing fear of weakness and vulnerability; but in doing so we increasingly make the elderly feel abandoned and not tolerated."

But the elderly “should be a storehouse of wisdom for the whole of society,” the Pope stressed. Speaking off the cuff after the example he gave of the woman who had been abandoned in an old age home, the Pope told another story which resembles of the Grimm brothers’ fairy tales Lev Tolstoy had also once referred to: “When I was a child, my grandmother used to tell us a story about an elderly man who dirtied himself every time he ate because he couldn’t lift the spoon with the soup to his mouth. His son, the father of the family decided that he was to eat at a separate table in the kitchen where he was out of sight and would eat alone. This way he wouldn’t embarrass himself in front of friends who came to lunch or dinner. A few days later, the son came home and found his own son, his youngest, making something with wood, a hammer and nails. His father said: ‘What are you doing?’ – ‘I’m making a table dad’ – ‘A table? Why? – ‘So that when you grow old you can eat there’. Children are more conscious than us!” The Church cannot and does not want to conform to a mentality of intolerance, even less so one of indifference and disregard toward old age,” the Pope said.

“The elderly are men and women, fathers and mothers who were on the same paths as ourselves before us, in the same very house as us, facing the same very battle for a deserving life. They are men and women from whom we have received a great deal. An elderly person is not an alien. We are that elderly person: sooner or later we will inevitably grow old too, even if we don’t think about it. And if we don’t learn to treat old people well, then this is how we will also be treated.”

The Pope concluded by saying: “All of us elderly people are a little bit fragile. But some are particularly vulnerable, many are alone and sick. Some depend on essential treatment and care from other people. Does this mean we will take a step back? Will we abandon them to their fate? A society without closeness, where gratuity and affection without something in exchange – even among strangers – are becoming a rarity, in a perverse society. The Church, which is faithful to the Word of God, cannot tolerate this degenerative situation. A community in which closeness and gratuity are no longer considered essential would lose its soul. “Where the elderly are not honoured there is no future for the young.”